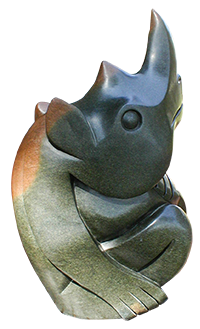 Here is a selection of questions we are asked most often. If you have any others, please contact us and we will be happy to assist.

What is the difference between a curio and a piece of art?

This could be discussed at great length.  However, one the main differences can be said to be that curios are not original – many carvings of the same theme are repeated again and again. Furthermore, curios are often made from poorer quality stone, such as soapstone, as it is easier to work, but which damages easily and degenerates quickly, due to its soft, porous nature.

Do fakes and copies exist?

Unfortunately they do. It often takes an expert to tell the difference which is why it is better to buy from a reputable gallery like Stone Dynamics, where you will be guaranteed the genuine article, sourced direct from the artist.

How can you tell if a sculpture is authentic?

All the sculptures created by known artists are signed by that artist, usually at the back or underneath the piece. Also, most sculptors have there own definite style, like the impressionist painters. Copies can be detected by the signature, type of stone used, quality, finish and style.

This is an original piece by the late Bernard Matamera, one of Zimbabwe’s first and most respected sculptors. It is part of the permanent collection at The Victoria Falls Hotel.

Verified “one of a kind” sculpture

What is the history of this art form?

For a full history buy our book!

Though beautiful stone Zimbabwe Birds were created at Great Zimbabwe in the fifteenth century, contemporary authentic Zimbabwe Stone Sculpture has its roots in the 1950’s when Frank McEwan, the first Director of the Zimbabwe National Gallery, started an art workshop.

Initially, the focus was on painting, and McEwan was impressed by the exciting and uninhibited work produced by the artists. He encouraged them to try sculpting with stone, and inspired them to express themselves, while teaching them the value of artistic integrity.

The results were astounding and instantly drew international attention. Sculptors such as Takawira, Munyaradzi, Mukomberanwa and Mariga earned acclaim from art critics around the world through exhibitions in Africa, Europe and America. A wonderful new culture of modern sculpture was born!

What kind of stone is used?

The stone used most often by the artists we represent is serpentine. This is a hard metamorphic rock that exists in many colours. The very hard, black form of serpentine is often referred to as spring stone. Other stones are verdite, granite and lipidolite. Verdite is usually a green, or brown, semi-precious stone which is very hard and therefore difficult to carve. Lipidolite, found in granite areas, is a purple colour, and, like granite, is extremely hard and requires special tungsten hand tools to carve it. Soapstone – a soft, chalky stone – is the medium used most often by curio carvers.

To read more about the stone buy our book!

Where is the stone mined, and how?

The stone is mined manually in open cast mine and then loaded on to trucks – again manually – and transported great distances to the artists’ workshops. The main sources are the Great Dyke that runs through the centre of Zimbabwe, and numerous granite areas. An expert can tell where the stone comes from by looking at it’s colour and texture.

Where else in Africa does stone sculpture exist?

Sculptures in stone are rare in Africa. Apart from North Africa and Zimbabwe, the main media for sculpture is traditionally clay or wood. Great Zimbabwe – the magnificent 15th Century stone city near Masvingo in the centre of the country – is the inspiration for Zimbabwe’s name and means ‘the house of stone’. It was here that the famous and beautiful stone Zimbabwe Birds were found.

What is meant by ‘first, second and third generation’ artists?

Contemporary stone sculpture in Zimbabwe has its roots in the early 1950’s. The first few decades were dominated by the ‘pioneer’ sculptors whose work is more established in their tribal African cultural values. They are referred to as the ‘first’ generation. In the early 1980’s, a younger breed of sculptors started producing work that was more personal, less influenced by their culture and more by the modern world. They were called the ‘second generation’. In the late 1990’s, another set of young artists emerged – the ‘third generation’.

Who are the most well known artists?

The ‘first generation’ artists will have had the most exposure, both locally and internationally, and include artists such as Nicholas Mukomberanwa, Henry Munyaradzi, John, Bernard and Lazarus Takawira and Joram Mariga. Stone Dynamics promoted many of the ‘second generation’ artists, who have now become the ‘new masters’ and include sculptors such as Richard Mteki, Dominic Benhura, Jonathan Gutsa, Ernest Chiwaridzo, Gladman Zinyeka, Zachariah Njobo, and Fredy Mariga.

What literature is available on Zimbabwe Stone Sculpture?

Several books and articles have been written on this unique art form. See Our Book page for the book we recently published to celebrate 30 years of Stone Dynamics Gallery.  For further reading see below:

Why does the freight seem so high in comparison to the price of the sculpture?

Zimbabwe, situated in Southern Africa, does not have great volumes of  freight and the distances to our clients’ destinations is usually great.  Shipments travel via first Harare and then most often a second city in Africa such as Johannesburg.  Fuel costs are in line with international prices – sometimes higher.  Standard pricing is not possible each shipment has to be individually costed and quoted for.  These factors add to the freight cost.  Stone Dynamics is aware of this and, to assist our clients, we do not add an admin fee and make the arrangements and follow up for free. So one could just as easily ask – “Why are the sculptures so reasonable in comparison to the freight costs?”

Why the variations in price?

The price of the sculpture is determined by who the artist is who created the sculpture, the intrinsic quality of the piece, the type of stone used and, to a lesser extent, the size of the work.