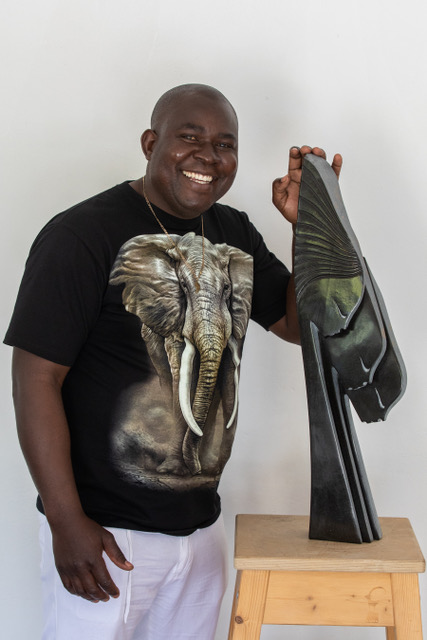 Lovemore was born in Ruwa in 1985. His bother Lameck introduced Lovemore to stone sculpture when he was twelve and he started helping Lameck with sanding and polishing his sculptures. Later Lameck gave him some small raw stones to work on and taught him the techniques of carving.

A few years later the sculptures that he produced started attracting interest from buyers who came to his brother’s studio, and they started to buy his work. Gradually Lovemore moved out of his brother’s shadow and became a recognized sculptor on his own. He still credits his brother Lameck, who died in 2004, and the late Nicholas Mukomberanwa for helping and inspiring him.

Lovemore believes that his secret is to remove the unwanted raw stone around to discover the sculpture which already exists hidden inside. A great deal of his work focuses on elegant feminine bodies with long necks and heads with flowing hair. He likes to use the angles of the stone to accentuate body parts and the life like faces. He also prefers stone with colour to define the softness and vibrance of the feminine.

Lovemore’s work has been shown in Europe and the USA and has been featured in many local exhibitions. His popular style has made him a best selling artist at Stone Dynamics Gallery where his work has been bought by customers from around the world.

“He also prefers stone with colour to define the softness and vibrance of the feminine.”