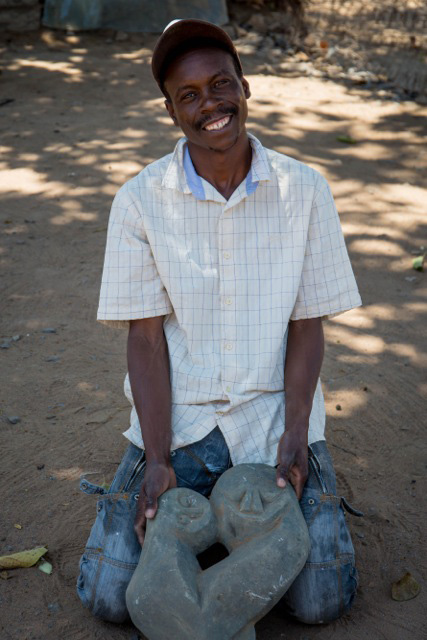 John was born in 1978 in Murewa in north east Zimbabwe. He is the younger brother of Jonathan Gutsa and cousin of Tapfuma Gutsa. Since he was a child he has enjoyed arts and crafts and after finishing school he went to Harare to learn to carve with his elder brother Jonathan.

In Harare he worked at the Utonga Studio in New Tafara and was joined by his other brothers Luckson, Daniel and Alfred. He also studied at college in hotel and restaurant management. In 2000 he joined the Dominic Benhura studio working as an apprentice to his brother Jonathan. He eventually learnt the full range of skills needed to become a full time sculptor and was able to express himself using his ideas and feelings.

In 2003 exhibited his sculptures at the Alliance Francaise and the Zimbabwean German Society in Harare. In 2009 his work was part of a group exhibition with Stone Dynamics Gallery in Zurich at the Susi Brunner Galerie

He has joined the stable of young talented artists being encouraged and promoted by Stone Dynamics Gallery.

“Jonathan has a fascination with wild animals and his abstract interpretation of elephants and giraffes, in particular, gives a new dimension to these subjects. “