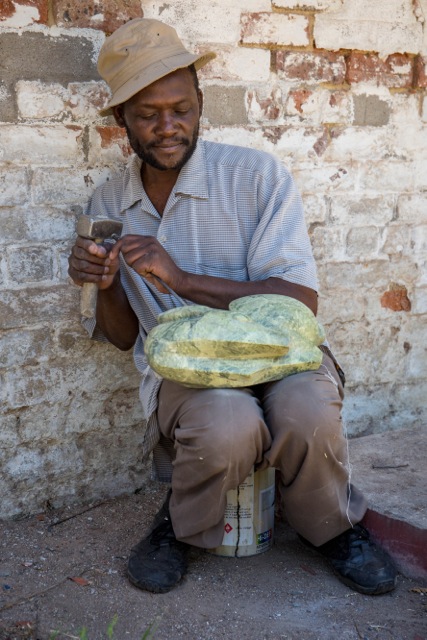 Cosmos was born on 5th January 1960 in the Musana Communal Land near Bindura, 70 Kilometers North of Harare. He showed an early interest in art at Primary School where he was the class illustrator-drawing charts and diagrams for the teacher. About ten years later, encouraged and supported by his mother he decided to take up art as a profession.
He began painting after attending the Kuanda Art Centre and the Peter Birch School of Art in Harare and sculpting after joining the Canon Paterson Art Centre. Cosmos carved mainly in the semi-precious verdite and did mainly heads. However many years later and with the encouragement of artists like the late John Takawira he started doing more abstract pieces.Themes such as beauty and peace are often portrayed in his works. His style shows gentleness, but embodies a sense of lyrical movement, particularly in his animal forms.
To main gallery

“There is often great mystery to his work and, although often beautiful and peaceful, its true meaning may be hidden in the beliefs that he learnt as a child.”