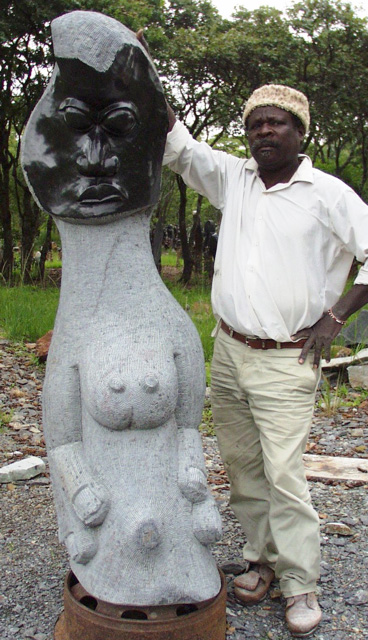 Bernard was born in Zezuru, Zimbabwe, in 1946. He started sculpting at Tengenenge, a sculpture community set up by a former tobacco farmer called Tom Blomefield. Tengenenge is situated in a commercial farming area near the village of Guruve, north west of the capital Harare.

Bernard Matemera was very loyal to Tengenege and, even when he was recognized as one of Zimbabwe’s most renowned sculptors, he continued to work and live there. Art critics have hailed his work to be amongst Africa’s finest contribution to the world of modern contemporary art.

His bold work deals in the pleasures of the flesh and there is a wide distribution of the properties of man, animal and spirit and, even if not universally understood, has always demanded attention. In his sculptures there is an unspent power and reserve of energy. There are hints of trans sexuality, which is unusual in Zimbabwean sculpture. His male figures are of womanly proportions with round thighs and buttocks, and his female figures have the aggressive stance of the male. Each sculpture is a celebration to the monumental, yet there is a sense of innocence and a freshness of a new experience.

His work has been exhibited all over the world, including New York’s Museum of Modern Art, and his sculptures are in the collections of many well known art collectors and celebrities. So, even with his untimely death in 2002, his legacy will live on.