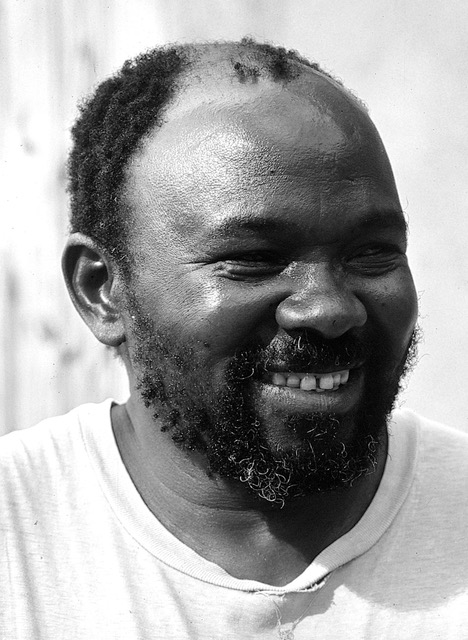 Born in 1940, near Rusape in Eastern Zimbabwe, Nicholas was first taught wood carving by the Swiss priest Father Gröber at the Serima Mission, located in the Masvingo province in central Zimbabwe. He left the mission in 1961 to become a policeman in Harare. However, he continued sculpting at the Canon Paterson Art Centre and then, in 1963, he joined the new Workshop School at the National Gallery, together with his friend Paul Gwichiri.

With Director McEwen’s help he was able to work at Vukutu sculpture centre in Nyanga in 1969 and 1970, while he was still a policeman. In 1976 he left the police and decided to dedicate himself fully to sculpting. He is one of the best-known ‘First Generation’ sculptors of Zimbabwe – an artist celebrated throughout the world. His work is in the collections of the Museum of Modern Art, New York, and the British Museum.

His art was defined by his strong beliefs in Shona traditions and myths. Family was also significant to him, as was the spiritual world. Although these influences were important to him, it was not a naïve view and he investigated their application in the modern world. Therefore the topics he explored often had a common message for all cultures and, because the subjects were so large, he could delve into them again and again.

He once said that he wanted his sculptures to remind his people about their age-old beliefs. Artistically, his sculptures are wonderful creations that are beautiful to look at and enjoy. Even if you do not understand the subject, you never tire of the symmetry and movement.

Nicholas lived and worked on his farm in Ruwa, near Harare. His children took up sculpting and the most well-known was Anderson (1968–2003). Nicholas taught me, Stuart, a great deal about Shona culture and stories. His passing reminded me of how lucky I have been to know these sculptors.

He once said that he wanted his sculptures to remind his people about their age-old beliefs.