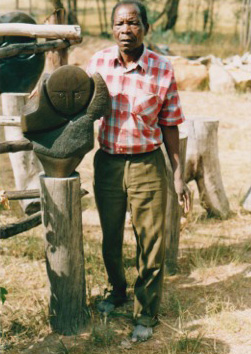 Micahael Shepherd, writing in the Sunday Telegraph in 1984, called Henry “one of the top ten sculptors in the world”. This was huge acclaim for this ‘simple’ man, born in the Guruve area of Zimbabwe in 1982.

Henry had herded cattle, been a hunter and a labour gang supervisor on a tobacco farm, but had never been to school. He had no idea about art until he heard that, on a farm in an area called Tengenenge, men were carving stones. Tengenenge was owned by Tom Blomefield, an eccentric farmer who had turned his tobacco farm into a sculpting community. Henry decided to try carving and Tom became his mentor. From the beginning he had a natural ability to express himself in stone.

Henry was one of the ‘pioneers’ – individuals whose sculptures stood out from the mass of commercial production, the quality of whose work gave Zimbabwe Stone Sculpture stature on the world stage.

Simplicity in art is the ultimate achievement and this was Henry’s genius. Picasso was once asked why he charged so much for a simple drawing that took him minutes to create, and he replied, “Yes, but it took me a lifetime to get to this point.”

Henry passed away in 1988 but his name lives on and his sculptures
grace homes and collections worldwide.

“He could see the beauty in the raw material and then carved a subject that suited the natural forms and shapes.”