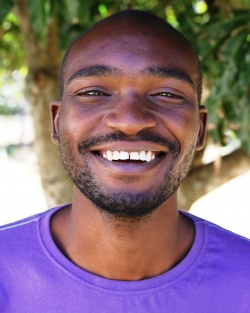 Tapiwa was born in October 1985. He is the fifth child in a family of nine. He always had a passion for art and initially his family and friends, and then, later, his teachers, encouraged him to pursue his dream.
He went to Churchill Boys High School, in Harare, and received the prize for best art student for three years running – from 2000 to 2003. After school he wanted to continue with art and was referred to Dominic Benhura and his art studio. Dominic inspired him to try sculpting with the help of another artist, Samkele Mhlaba, who helped him develop the techniques of stone sculpting.
He has been sculpting commercially for four years now.

Tapiwa is a new artist with Stone Dynamics and has immense talent. He says he is inspired by the natural world.